The Hydrologic Cycle and How it Affects Your Home's Water 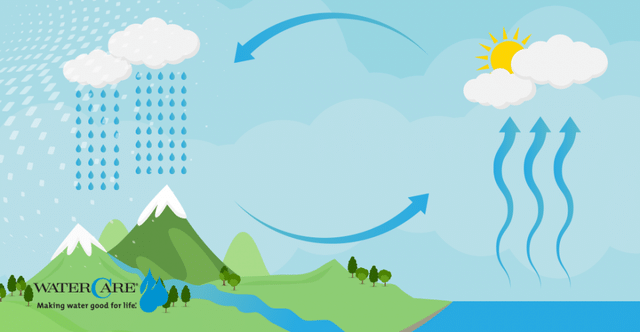 A cold glass of water; so refreshing on a warm summer day. Water is essential for life on earth, but where does it come from? Is the water we drink the same water that we find in rivers, lakes, and oceans? What about rain and snow? Where do they come from and are they a part of what we drink? The short answer is: Yes! All of the water available on Earth is tied together and is recycled through a natural process called the hydrologic cycle. The hydrologic cycle has 3 main parts: evaporation, condensation, and precipitation.

There are 3 forms of water making up the nearly 326 million cubic miles of water on Earth: solid, liquid and gas. The majority of the water is liquid in our oceans, lakes, rivers, and groundwater. Water is a solid in the form of glaciers and polar ice sheets. Vapor, water is its gas form, is found in the atmosphere.

To put it in perspective, oceans by far have the largest amount of water:

Through the hydrologic cycle of evaporation, condensation, and precipitation, the Earth doesn’t lose or gain water. This means that the water we have today is the same water our ancestors had, and it’s the same water that was here on Earth even millions of years ago.

The hydrologic cycle is a never-ending cycle, with no true beginning and no true end.

Condensation is the process where gas changes back into liquid water. Condensation is influenced by temperature. Imagine you have an ice-cold glass of water and you bring it outside on your deck on an 85 degree day. You set it on the table and soon the outside of your glass is covered in water. As the water cooled around your glass, the moisture in the air (vapor) reached its saturation point and changed form from gas to liquid. This same process is what makes clouds in the sky and fog at ground level.

Precipitation is the rain, snow, sleet, and hail that falls from the clouds. Precipitation happens when the cloud droplets in clouds grow to a size that they can no longer be suspended in the cloud, and they fall to Earth.

Additional Parts in the Hydrologic Cycle

While evaporation, condensation, and precipitation play key roles in the hydrologic cycle, they are not the only part of the cycle.

Transpiration is the process where water vapor is released from plants and soil. This vapor then works the same way as vapor in the atmosphere from evaporation.

Runoff Is simply water moving across the earth or “running off” the land. Just as rain runs across your yard to the road, or snow and ice that melts from glaciers runs from the polar ice caps creating small streams and ponds along the way.

Water in Your Home

The hydrologic cycle includes the water in your home. While it is in the liquid state as a part of ground water, we use it for any number of things before it gets recycled back into a vapor. The water you cook with, use for bathing, water your plants, clean your clothes, and the water you drink has all been on a journey collecting many contaminants along the way. Whether it’s minerals from the ground or a more human element like industrial runoff, there may be more to your water than just H2O. That’s why it’s important to have a water expert test your water and give you a clear picture of where it has been in its cycle before you drink that nice cool glass of water this summer.

If you think your water at home may be problematic, give us a call! We will send a trained technician to test your water. We will find the solution you need with our full line of WaterCare products.